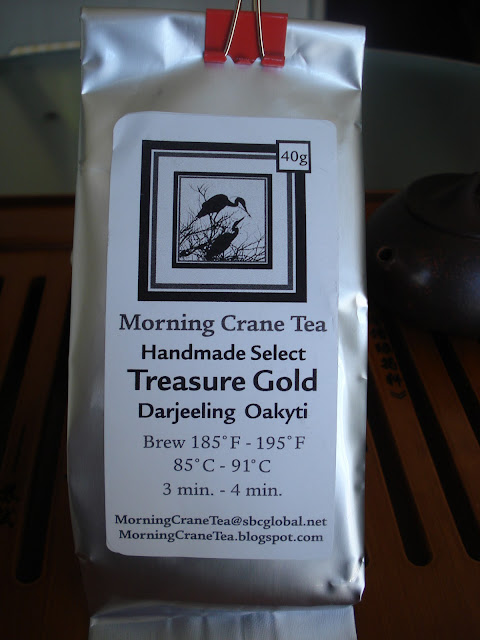 A few days ago I received a package with a nice little assortment of teas from Arthur of Morning Crane Tea.  This was the tea that demanded my immediate attention. I have been an admirer of teas from both Darjeeling and Nepal for a long time. In my opinion Nepalese teas are quite often superior to their Darjeeling neighbors and are usually far less expensive. But......first things first! Is this a Darjeeling or a Nepalese tea? It has to be one or the other....right? Well, not really. On the tea packet Arthur explains that the area where this tea is from borders both countries. The Mechi River being the dividing line between Nepal and India share very similar tea plants and growing conditions which makes it,s origin pretty much irrelevant.

The photos of this tea that Arthur has on his blog is what first sparked my interest because this tea looks nothing like I've ever seen from either Darjeeling or Nepal before. This teas leaves resemble little sticks, very different than the large, flaky leaves I've encountered in the past. And that,s kind of what they feel like as well, little sticks. When placing the dry leaf into the pot they make a clinking sound. They are very, very dense and compact. Kinda resembles a Yunnan tea, doesn't it? Which leads me to wonder, is this tea China Jat? Which is what the vast majority of Darjeeling teas are made from. Or the Assam varietal that is native to India. Judging from the teas aroma, appearance and flavor I,d have to bet on the later.

This tea "Treasure Gold" is made from plants that for whatever reason, climactic conditions? Produces leaves that are a golden color. This doesn't happen every year, just once in a Blue Moon. 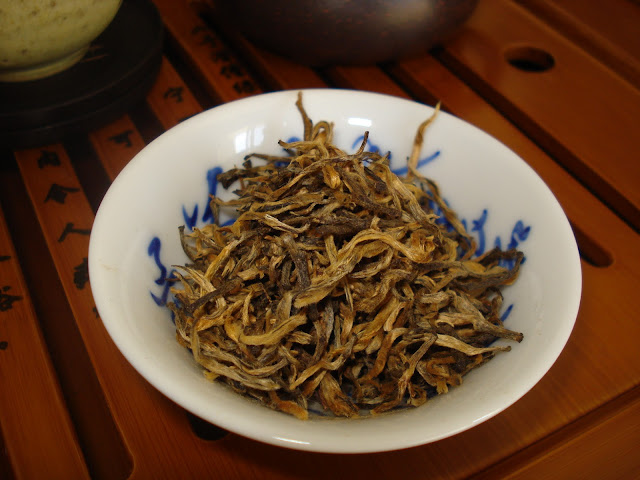 The aroma from the dry leaf is heavy, rich and full .It,s not dissimilar to Korean Hwangcha but definitely in a category of it,s own. Honey, roasted grain and fruit are there for the taking, you don,t have to sit and ponder about these flavors and aromas, they are there in abundance. 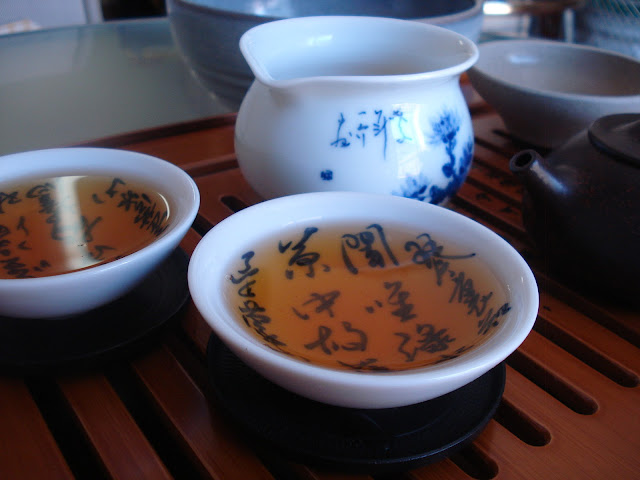 The teas flavor matches the aroma to perfection. Sweet honey, roasted grain or cereal, a touch of fruit and the mere suggestion of spice. Full, rich mouth feel. I can still taste this tea flavor even an hour after having drank it. Astringency is very, very minimal and it,s only really noticeable in the later infusions.

This particular tea session I used a Yixing pot with repeated brewing to see how the tea would stand up. I probably won,t try this again with this tea.

I have stated in previous posts that in my opinion some teas do not stand up to repeated steeping very well. This is by no means a strike against it. Some teas reveal nuances of flavor and aroma with repeated brewing and it can be interesting to watch it,s flavor change and evolve. But some teas have nothing further to reveal, with additional steeping it just becomes gradually weaker with it,s flavor unchanged. It,s just the nature of the tea, nothing to do with quality.


So, my criteria for determining whether or not a tea is gong-fu-able is......does it,s flavor change or evolve with repeated brewing. If not, I use a western style approach. Less leaf, more water, longer steeping time. Enjoy it in all it,s glory, get the full impact and call it a day. But.....that,s just me. You guys do whatever you see fit, after all, it,s your tea. 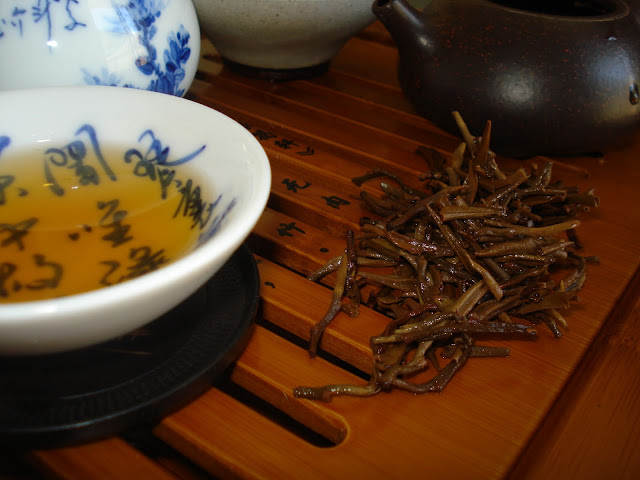 The leaf is exhausted, it,s on it,s fourth steeping and still the leaves, sticks won,t fully open. What a wonderful, strange tea this is. I hope everyone gets a chance to try this tea before it,s gone. This is a tea that anybody would appreciate. Brewing parameters don,t need to be strictly adhered to because this tea is very user friendly.
No comments:
Labels: Nepalese Teas 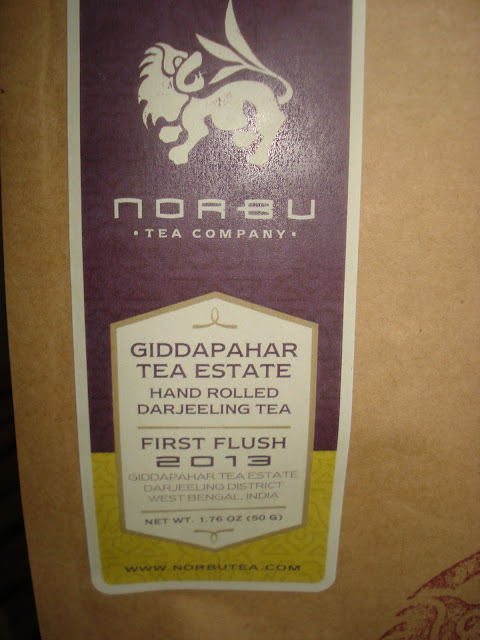 I know the whole where, when and why of how my infatuation with tea began. It seems so long ago, and..... I guess it was. I,m thinking it was about forty or so years ago was when I first encountered a cup of really good Darjeeling tea. It obviously made quite an impression on me.  That particular Darjeeling I just happened to stumble upon, a fortunate recipient of circumstance. I was visiting a friend in San Francisco and had stopped in at a local coffee shop. She had ordered a pot of Darjeeling and I had a cup from her pot. That first cup marks the beginning of a never ending search for good tea.

A lot has changed since then. What, with the invention of that world wide inter-web thing-a-mo-bob. Anybody reading this is aware of how easy it is to get just about anything you can think of.

I have bought tea from Norbu on just a few previous occasions. He now sources his own teas. Not just buying online and reselling. He has a pretty wide selection with teas in every category. Green, Oolong, Black or Puerh. This tea is entirely hand made, which is rare for Darjeeling.  Norbu was so impressed upon tasting this tea that he bought the entire (albeit tiny,3 kg.) lot. 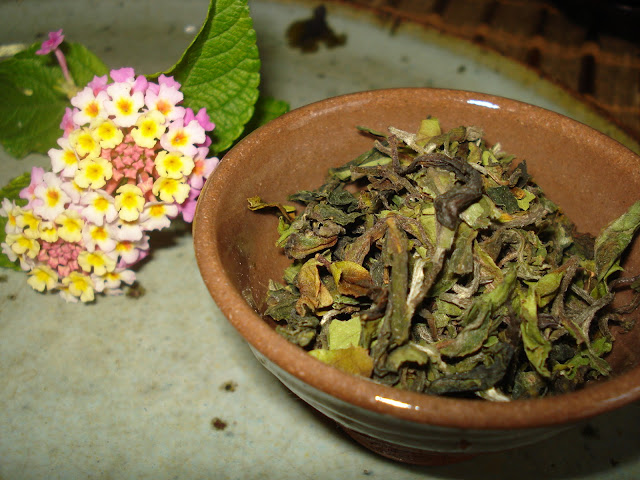 Now isn't that a pretty site? These leaves are very large, crispy and flaky. The scent of the dry leaf is extremely floral and with just a hint of vegetation. The flavor matches the aroma to perfection. Sweet, floral with just the slightest trace of greenery. There is no astringency at all. The muscatel flavor and aroma we expect from a Darjeeling are there, but being pushed to the background they are barely noticeable.

I don,t brew Darjeeling teas using a Gong fu method. Just one 3-4 minute steeping works out best for me. In my opinion, using a gong fu approach doesn't  work well because the flavors are too hit or miss. All the flavor aspects need to be represented in one fell swoop to be fully appreciated. 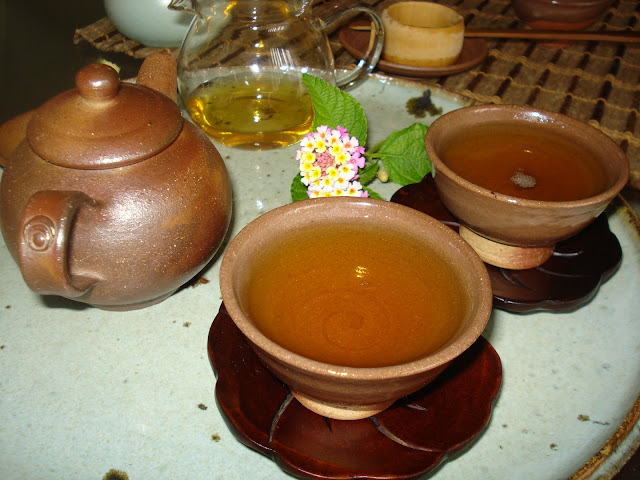 Even though the cups are brown you can see the color of the brew. A light golden, amber. The tea smells sweet with florals coming out the ying-yang. You can see in the picture below that there are some stems still attached to the leaves. In my book this is not a bad thing at all. In fact I kinda like teas with some stems still in the mix.

I've had these cups (made by Park Jong Il ) for over a year but never used them before today, they are just a tad too small for my liking. I have never used them for photography purposes before because I reckoned the brown glaze wouldn't allow the teas color to be accurately represented. But there it is.......plain as day.

A cup of good Darjeeling always brings back memories. It,s funny how with just one sip, that distinctive flavor takes me right back to where it all began. I,m right back in San Francisco sitting on a side walk cafe with a cool ocean breeze.

Minus the pony tail and flip flops! 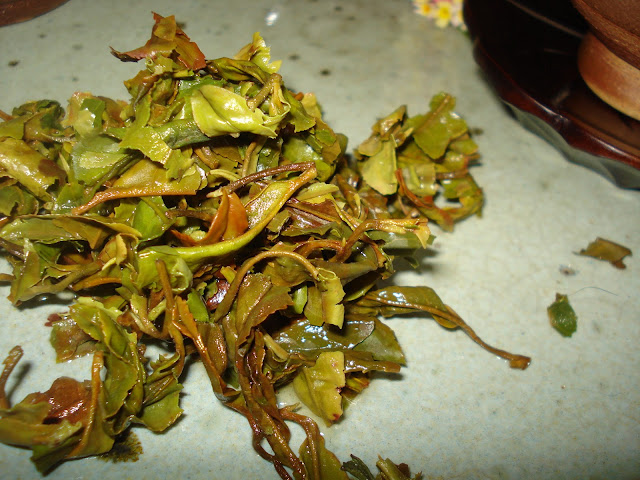