This particular Hwang-Cha is something extra special. Why is it special? Because this tea was handmade from wild tea bushes. Also because it is made before Buddha's birthday. (first flush in other words) Which from what I understand is a bit unusual because typically the first and second flush are used for making green tea. Later in the season is when leaves are picked for Hwang-Cha production. So...Jeong Jae Yeun must have real a passion for Hwang-Cha if he is willing to sacrifice the first leaves of spring to make this type of tea.

This tea as well as a couple of others were acquired from Morning Crane Tea. Arthur (Morning Crane Tea) also sent along some samples of Dok-Cha. I have never had Dok-Cha before and I;m a little uncertain as to how to brew it. One cake type Dok-Cha and a disk type Dok-Cha. The cake type requires roasting before brewing but the disk type doesn't. Water to disk-cake ratio? I have no idea. Have to get in touch with  Matt he will know. But I;ll get around to that sometime in the future. 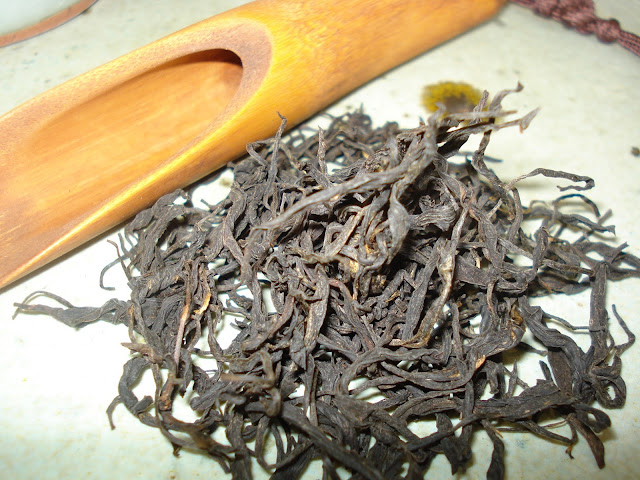 As you can see the dried leaf is very long and chunky. Even with the help of the funnel it's not easy to get these leaves into the pot without breaking them. In my opinion this tea requires a lot of leaf to get fully saturated flavors, 6 gm's for this 8 oz. pot. Sounds like a lot but skimping on the quantity is a mistake. I think a lot of people, including myself, have the tendency to skimp on the leaf qty. in an attempt to make their teas last a bit longer. But not using enough leaf brews a cup of fairly lifeless tea no matter the teas quality. 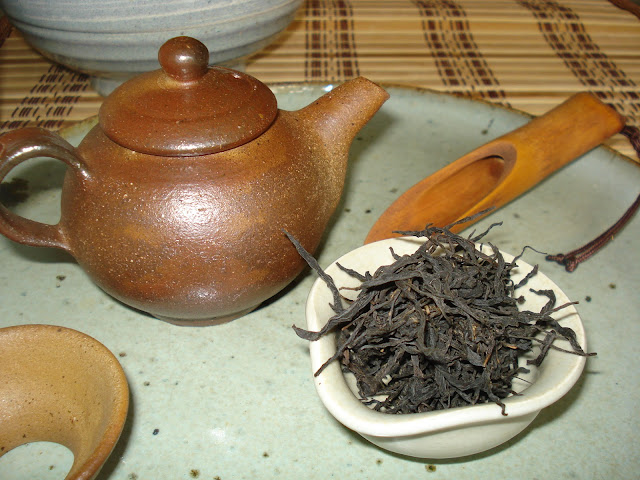 Very full and rich, sweet flavors of grain, malt and honey. I agree with Matt that there are some fig like fruit flavors. The tea's aroma follows suit matching the flavor. This tea requires opening up. Meaning that the leaf is very tight and compact and consequently the first infusion isn't necessarily representative of what it's capable of. By the second and third infusion it's depth starts to shine.

I will say that the Balhyocha made from later harvest's seem to have more body. Not that this one is lacking in any way.......Just saying! It's durability can go the distance without missing a beat. None of the flavors drop out, they just change positions, an attribute that I relish in any tea. 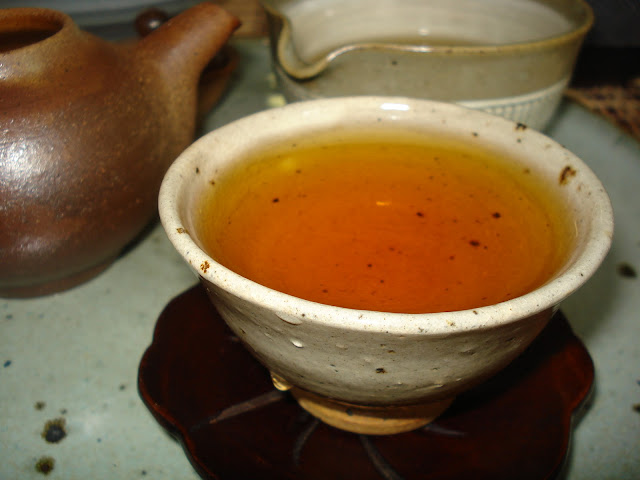 195 degree water and the first infusion is a bit pale isn't it? I'm not concerned, I've been drinking this tea for several days now and I know that this is just the beginning of whats to come. This is a very nice tea that I'm enjoying very much. I've been getting 5-6 infusions from the leaf. And every one of them is still very full and rich, as opposed to washed out and thin. I do increase the water temperature a bit in the later infusions trying to get every last bit of goodness from the leaf.

Arthur asks, Is this the best Hwangcha made in Korea? I don't know, but in my book it's superb. Arthur says he will be back from Korea in June with freshly made teas, can't wait.