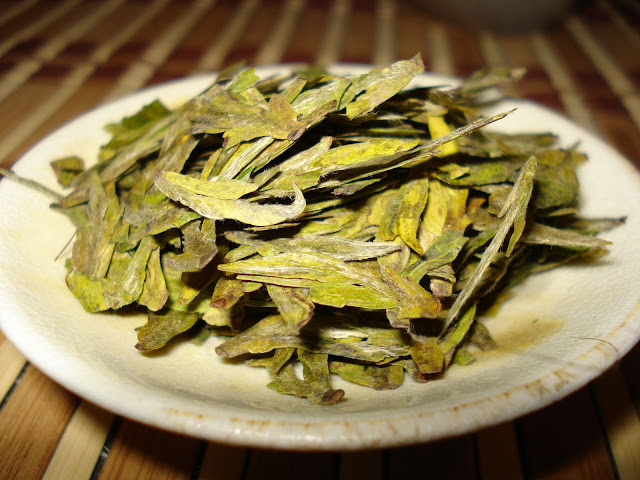 Tis the season for what is one of my all time favorite Chinese green tea's, Long Jing a.k.a. Dragon Well. Even those unfamiliar with green tea's are likely to have heard of Long Jing. There is no other tea on earth that smells as good as Long Jing, at least in my opinion. A lb. of this Dafo Long Jing was delivered just a few days ago (I know...a whole lb?) I had some steeping in a gaiwan in the kitchen and while side tracked in another room the rich and nutty aroma that is unique to Long Jing wafted down the hall to remind me that it was ready. The aroma is very intense and it permeates the entire room but this tea is way too expensive for such negligent brewing. In the summer months I,m all about fresh and clean green tea's. Oolong's and Puerhs are for the most part relegated to Autumn and Winter, they can be just a little too heavy in hot weather. 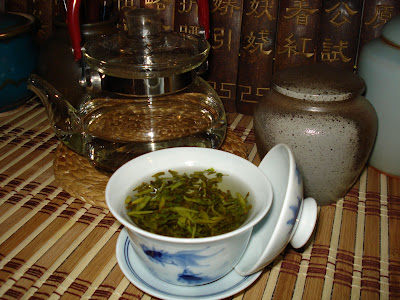 This "Dafo" Long Jing is not grown in the officially designated county of Xi Hu, but just outside of it, in Xin Chang county. Tea's grown in Xi Hu county are the cream of the crop Long Jing's. But of course there are different grades of tea from Xi Hu and I would rather pay for a prime grade from a lesser esteemed region than a lower grade from the primo region. People that are interested in pinching pennies yet still want a high quality tea have been appreciating Dafo Long Jing for years. Usually about half the price of the tea's grown in Xi Hu. The designation of "Pre Qing Ming" means that it was picked before the rains. The very first pick of the year is the one that is most prized.  As you can see in the pics the dry leaf is well made, almost paper thin bud and leaf sets that were pan dried, the old fashioned traditional way, by hand in large wok's. 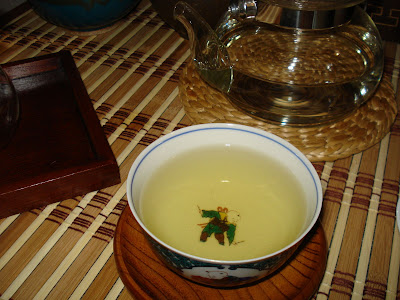 I think that green tea's are the hardest of all tea's to brew well. The slightest change in brewing parameters can yield very different tastes and aroma's. The skill required to brew these tea's to perfection every time is not a skill that I claim to have mastered but sometimes when everything is just right, water temp. infusion times and all the other variables are in sinc it's easy to realize why this tea is so famous. It's simply some of the best tea there is. This particular Long Jing requires a very specific water temperature of 185-187 degree's. Water either hotter or colder and the tea's aromas will not bloom nearly as well. Also needs a little more leaf than tea's from previous years. Growing conditions were not good this year and it shows in a lot of the tea's on the market. The Pre-Qing Ming Long Jings will brew a more light and delicate cup than the all leaf Long Jings. But don't confuse light and delicate with weak and thin. These Qing Ming tea's flavors are much more focused and complex. Each of the tea's flavor componants are apparent, they don't become muddled and blunt. The world is full of thousands of supposed Long Jing's and most of them aren't even from Zhejiang province. But if you buy from vendors that know their stuff and you are willing to pay for it, finding the real thing isn't that much of a challenge. But having said that, the only Long Jing that we are ever going to see is what is available commercially. I don't think we are ever going to taste the cream of the crop by shopping online. But that's o.k. by me, as long as I can continue to get tea's of this quality then I,m a happy camper.
No comments:
Labels: China Green Tea 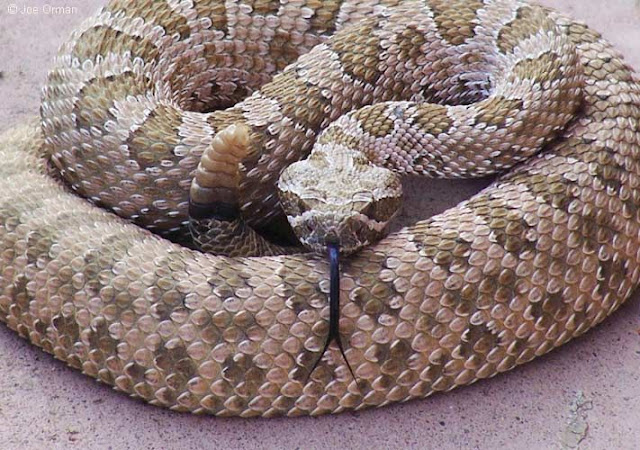 There's trouble on the home front. My typical morning and evening routine is to have my tea outside on the patio. I like it there, big beautiful trees, squirrels at play, blue birds and cardinals make Austin there home. The seldom seen owls and pesky deer are also no stranger here. Now, over the past month or so Ive gone out late at night or early morning to relax and have my tea only to realize that there is a rattlesnake just a few feet away from where I am sitting. This situation limits my ability to appreciate my tea. And after having realized the danger you are in, no matter what tea you are brewing it all tends to taste like crap. Having seen so many this year (and it's only May) I realized that there must be a nest of them somewhere close by. You know as summer progresses they are only going to get bigger and their venom more toxic. The evening news has broadcast (like they do every year) to be careful, use common sense kinda thing. On a normal year I might see one or two snakes, no big deal. But this year they are saying that for whatever reason the snakes are in abundance and evidently they are all headed for my back yard. One of the real problems with snakes around residential areas is that they can get into the foundation of your home and sometimes when they come out it's on the wrong side of the wall and they wind up inside your house. 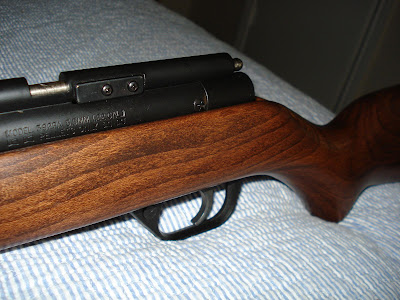 So I decided to take matters into my own hands. A Benjamin & Sheridan .22 caliber bolt action pellet gun should do the trick. I don't like the idea of killing anything but.........If it comes down to it, I,m gonna kill the little tea spoilers. And if I do say so myself, I am one hell of a shot with a rifle. I couldn't hit a house with a hand gun. On two different occasions Ive found two snakes at the same time on my porch. I know to stay away from them and they will usually slither off without any encouragement from me, but my dogs don't know any better. Just can't take that chance. So, if you hear any rat-a-tat's going off in the middle of the night, it's just me, don't worry about it, go back to sleep. 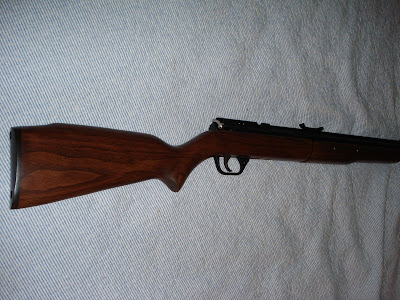 My new Benjamin & Sheridan, bolt action, single shot, .22 caliber, all solid hard wood walnut stock, all solid metal parts. This is a very well made pellet gun, not one of those cheap plastic ones. Although Ive always wanted a Daisy Red Rider BB gun since I was a kid but my parents being sensible wouldn't let me have one. They said I,d shoot my eye out, now where have I heard that before? 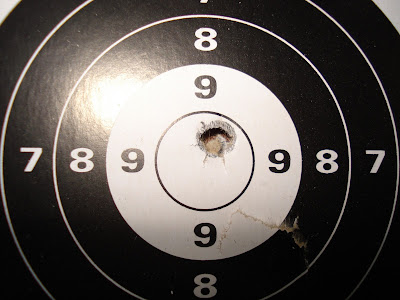 Twenty yards away, very first shot. I should be in the circus or something, one of those trick shooters. 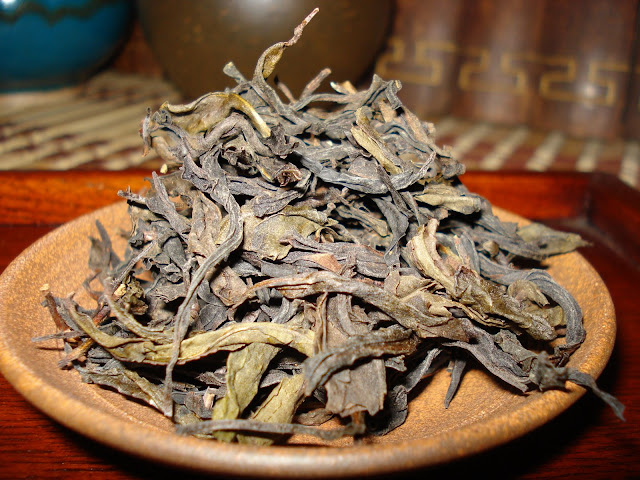 It wasn't all that many years ago that I remember thinking that Dan Cong Oolongs were just about as good as it gets when it comes to Chinese tea's. Ive since changed my ways. I occasionally will pick up a small quantity just for a change of pace. I bought this at my favorite local tea shop "The Steeping Room"  I still enjoy the ocassional Dan Cong but "a little go's a long way"  in my book. I think the best thing Dan Congs have going for them are their aroma's. 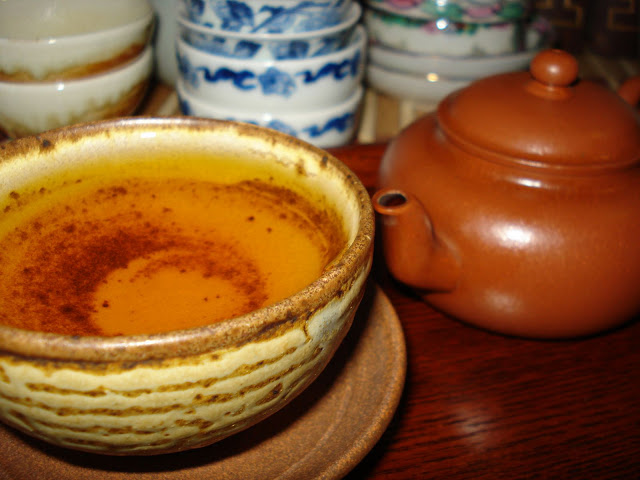 This Dan Cong is no exception, the aroma's are not shy in the least. Osmanthus florals, spice, honey and bitter hop's. Dan Cong's that are not heavily oxidised / fermented before being roasted tend to have a greener finished leaf. It's those green leaves that are providing the bitter hop's flavor and aroma. It's a good thing the hop's are there because otherwise this would be a really one dimensional tea. The bitterness is providing a contrast to the sweet floral's in the cup. The flavors follow right along with the aroma's. Honey sweet  florals and spice. Aromatherapy in a cup!  Brews to a deep golden color with good clarity. Not all that durable, by the fourth infusion it's well on it's way out. And by the way, there is no mistaking a Dan Cong that's on it's way out, the flavor doesn't just fade out gracefully as with most tea's. It typically becomes quite astringent and puckery with a chalky mouth feel.

What I realized about Dan Cong's after drinking them for so long is that they are all flash and seldom is there anything substantial underneath, no depth what so ever.  In other words there is very little in the way of complexity in the cup. Now.......I,m not talking smack about em or anything, just calling it how I see it. I admit that there has been exceptions and Ive had some sublime Dan Cong tea's but for the most part they are a really good smelling cup of uninteresting, superficial tea.
2 comments:
Labels: China Oolong 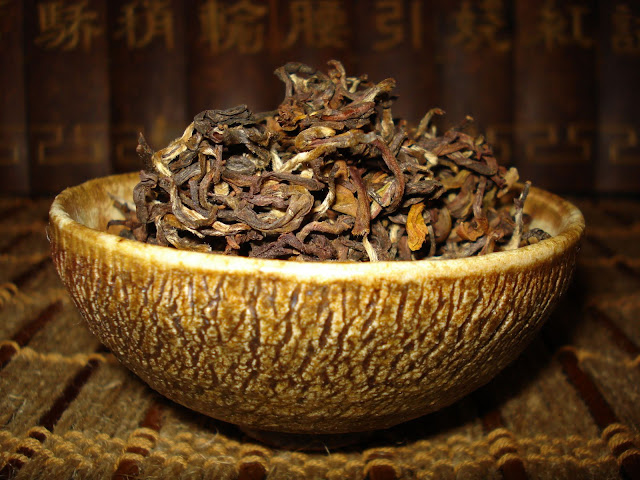 This is a tea I just had to have. You know the ones you see online somewhere and the vendors description sounds amazing? Or for whatever reason it just grabs your attention. This is one of Upton's new offerings. Upton's has several new first flush Darjeeling tea's that sound very promising and I almost grabbed one of those but instead I opted for the Himalayan Jun Chiyabari Estate GHRHT. Golden Hand Rolled Himalayan Tips. Upton's description is pretty much on target. It is very similar to a Bai Hao Oolong but with a few curves. Opening the bag creates an assault on the senses, extremely pungent with the aromas of cocoa, stone fruits, lemon and floral nuances. But the curve ball with this tea is the aroma of a very light and clean rosemary. I know, rosemary? Yep! And you know what? It matches this tea perfectly. The smell of cocoa and fruit are the dominant smells and flavors but the floral, lemon and rosemary form a perfect alliance in balancing the heavier flavors. This tea isn't cheap, A 140 gm. bag will set you back $54.72 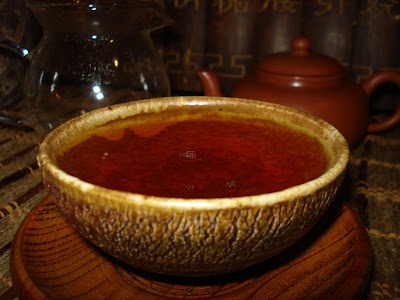 I wasn't sure how to approach brewing this tea, would it withstand gong fu? Or would it be better suited to the British style? Well, after experimenting Ive come to the conclusion that you can gong fu this tea but your not going to get multiple infusions, about four, maybe five steeping's is as far as it's going to go. And it's better with extended infusion times, starting at a minute for the first, 1&1/2, then 2 minutes. I used a small 125 ml. yixing, 5&1/2 gms. of leaf, boiling water. I think the most impressive thing about this tea is the aroma, it is incredibly strong, you can smell the teapot from across the room. A nice little treat for a change of pace. As much as I love my sheng and greens Ive gotta have something a little different every now and the
Just take a gander at those leaves, almost makes me want to just eat them. The tea brews up a cup with brilliant amber clarity. It's a medium bodied tea and just barely sweet enough to balance it's astringency.  By the way, that cup is one of Petr's. The "Bark Cup" is a little camera shy, I like them because they hold the entire pot of tea, they hold heat very well and they just feel right when holding them. It's a gorgeous set of cups but not easy to photograph. It seems my choices are I can get a good clear shot of the cups bark texture but with the whitish rim glaring. Or the rim clean and clear but the bark texture looking muddy. One of these days I'll read my camera's owners manual.
7 comments:
Labels: Nepalese Teas 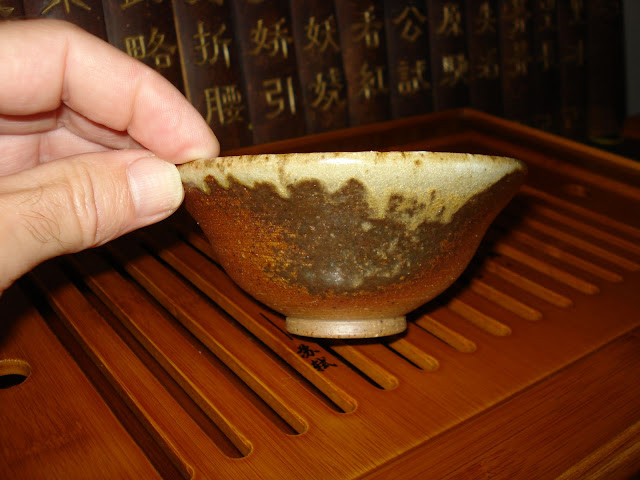 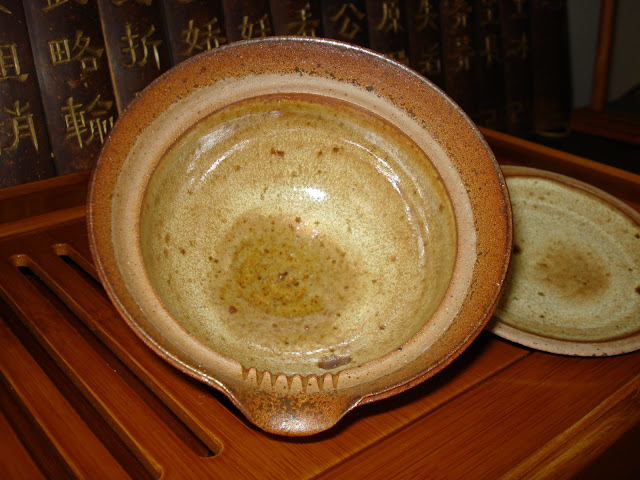 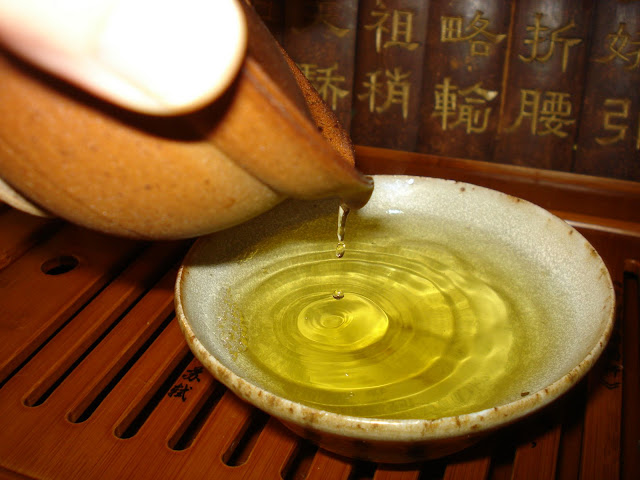 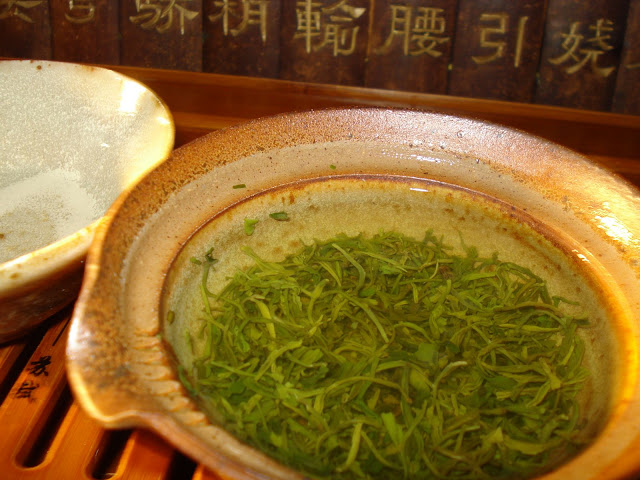 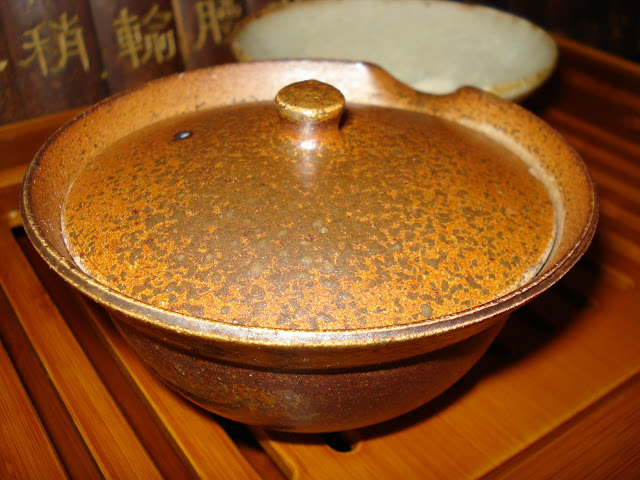 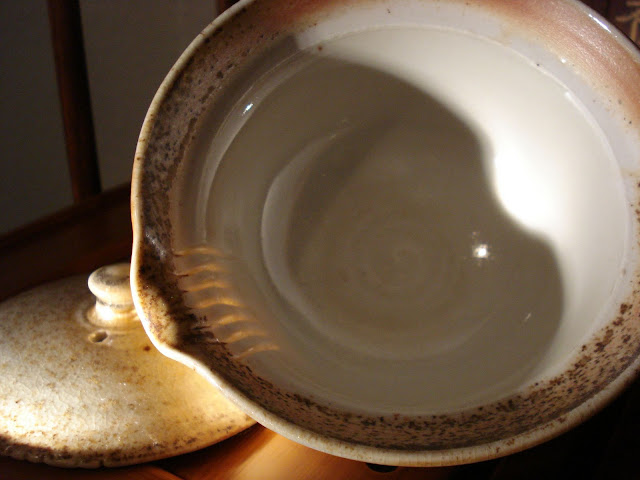 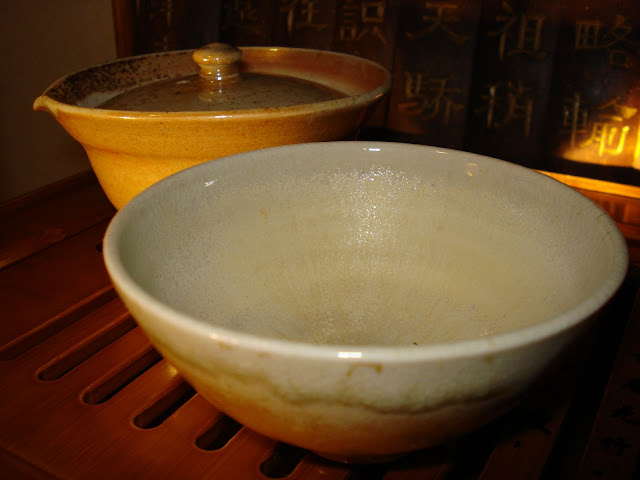 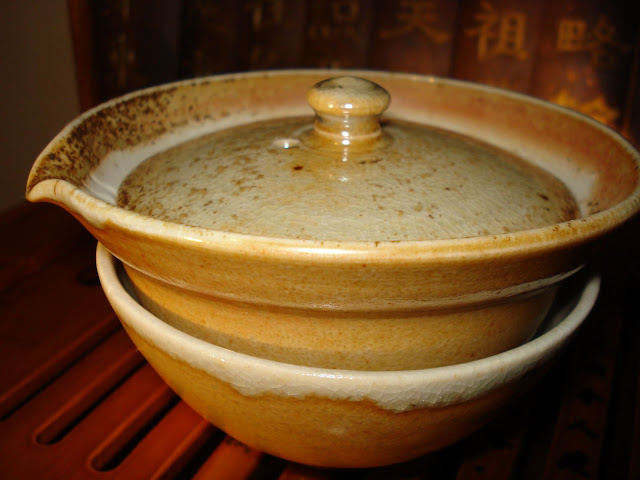 The following items are on the way here and I should be able to start posting them for sale in the next couple of weeks. 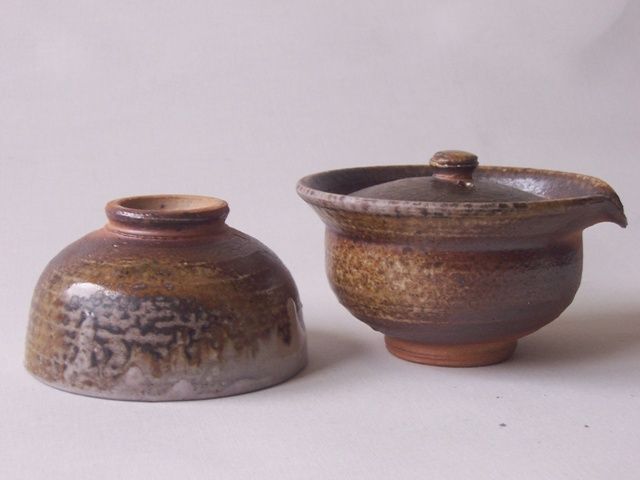 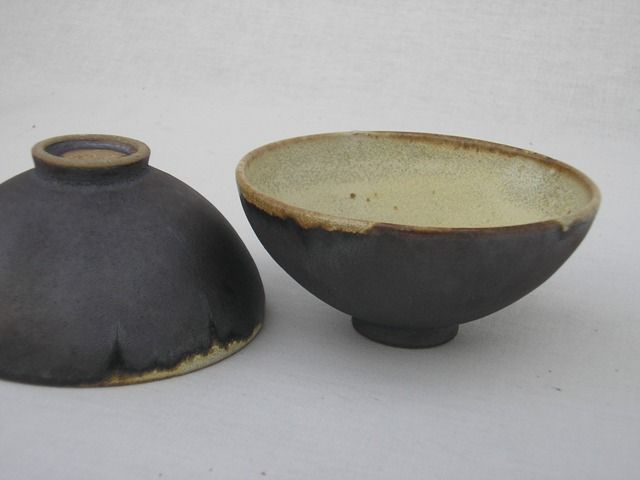 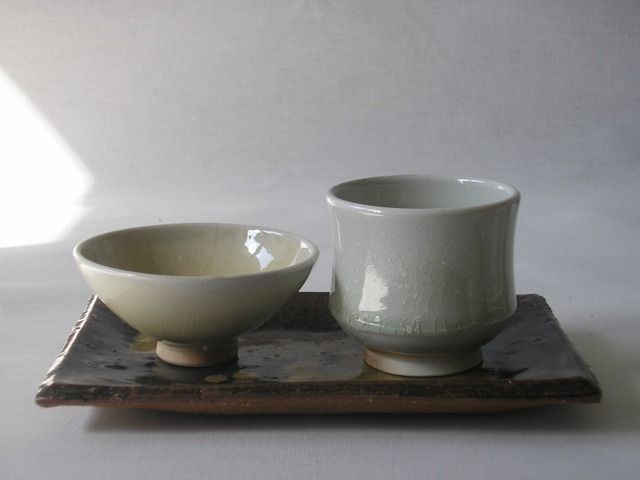 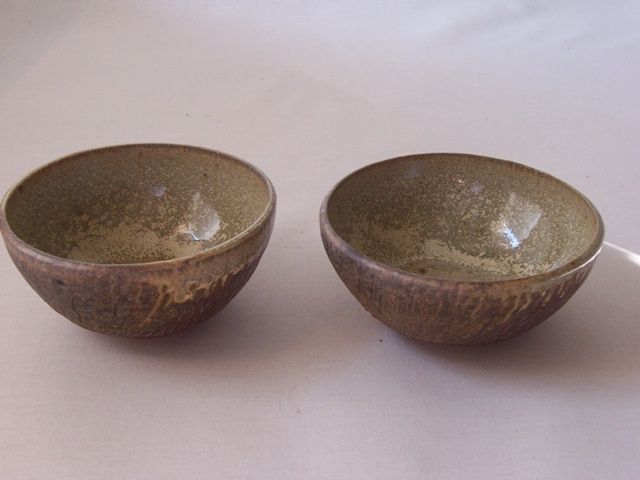 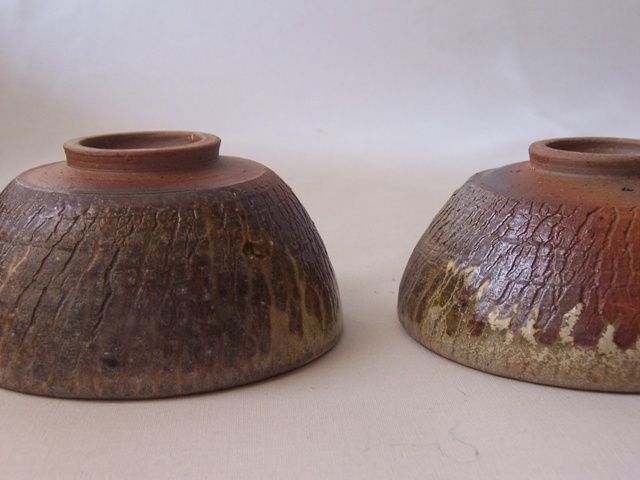