Happy Thanksgiving
﻿
As there are no family around this year I am at liberty to cook whatever I want for Thanksgiving dinner. I don't like turkey at all, and for that matter most of the traditional dishes that accompany the Thanksgiving feast are not at the top of my list of favorite foods. I do like Yams though. O.K. so.......what to cook? I decided to make Pho ( pronounced fuh ) Pho is Vietnam's national dish. A big steaming bowl of rice noodles, with either chicken or beef, swimming in a broth made from your meat bones of choice, onions, star anise, cinnamon stick, ginger, sugar, salt, fish sauce and black pepper corns. After the broth has simmered for hours the noodles get topped with mung bean sprouts, cilantro, Thai basil, lime, green onions, hoisen sauce and saracha (hot sauce) and a generous quantity of the broth. I love this stuff, so much better than pho-king turkey and the like.

By the way, there is no tea that I know of that can compete with the pungent flavors of this soup, so don't even waste your time or tea. If you have never had Pho before, and you like this kind of stuff, it's very easy to make and quite affordable. And it's fairly healthy, lean meats, rice noodles and spices and herbs. But it's best to wait a few hours before breaking out your tea and tea gear because after eating this soup your tea will be completely tasteless. 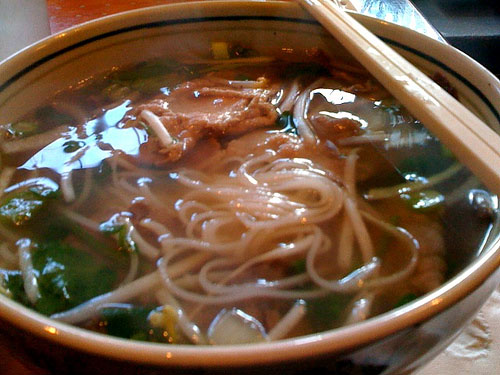