I touched upon the topic of the seasons dictating my choice in teas in the previous post. To continue with this issue, I pretty much only drink green teas during the Spring and Summer months. Yancha or Dan Congs are also on the menu from time to time. Listening to that little voice in my head,  I comply and save the Puerhs and Taiwan Oolongs for Autumn and Winter. For me that's when the time is right for such robust and intense teas. So.......there isn't going to be much talk of sheng on Tea Goober for a while, unless I run across something worth mentioning, the "Boys Club" (sheng posts) will be on hold.
" Lu'An Gua Pian "
China produces thousands of different kinds of green teas but there are really only a handful that I,m interested in. Without doubt one of my favorite China green teas. Lu'An Gua Pian is grown on Lu'An mountain in the Anhui Province. From what Ive read it is by far one of the most difficult China greens to produce. One of the reasons for the difficulty is the picking standard, only the first true leaf below the bud set is used to make Lu'An tea. Then the leaf is de-veined, can you imagine having to remove the vein from each and every leaf? Multiple basket firings finish the tea. This particular batch is from 2009, getting to be quite elderly but still delicious.Tea Trekker has become my "go-to" guys for China green teas. 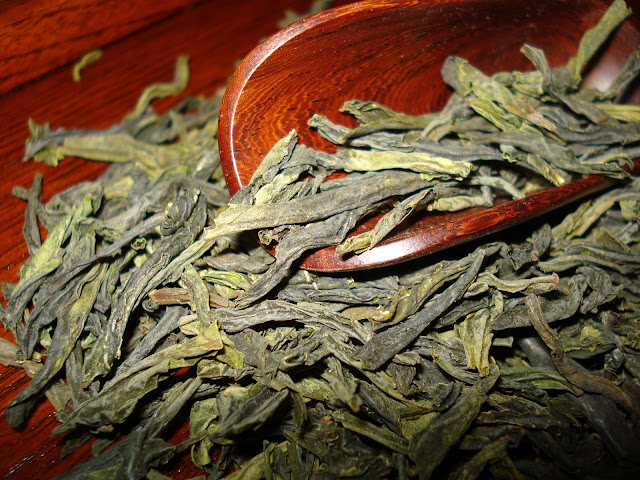 Lu'An tea leaves are always  big, thick and chunky. Colors ranging from a light olive to the deepest of greens. There is a lot of depth in the dry leafs aroma yet it subtly hints at the flavors to come. Even with it's age I can still smell the sweet and earthy characteristics that I remember from it's youth. Lu'An Gua Pian always brews a cup that's full, round and rich. Brews a cup that's deep golden yellow in color with the slightest of green undertone. Ive found Lu'An tea always good for several infusions. If  you have tried China greens and thought them to be not your cup, Lu'An might be the tea that changes your mind. It's very different from any other China green tea. Lu'An has no astringency what so ever and never turns bitter from over steeping. You can see the depth of color in the cup, it's not a light and wimpy tea at all. Almost Oolong like in it's viscosity but most definitely a green tea flavor profile.
Next in line is some Lu'Shan Clouds & Mist and Purple Bamboo. Good stuff ! 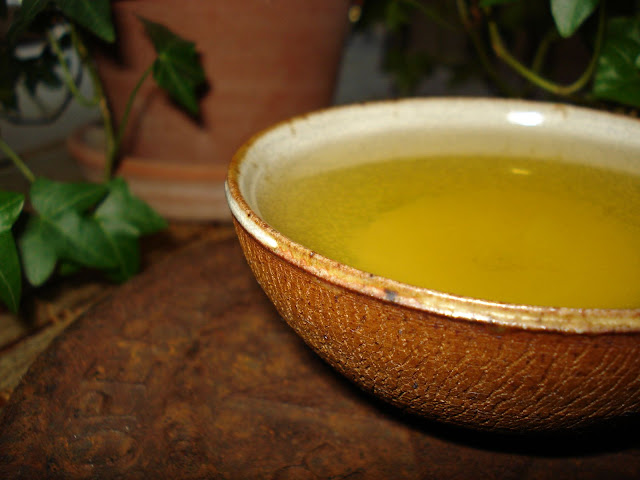 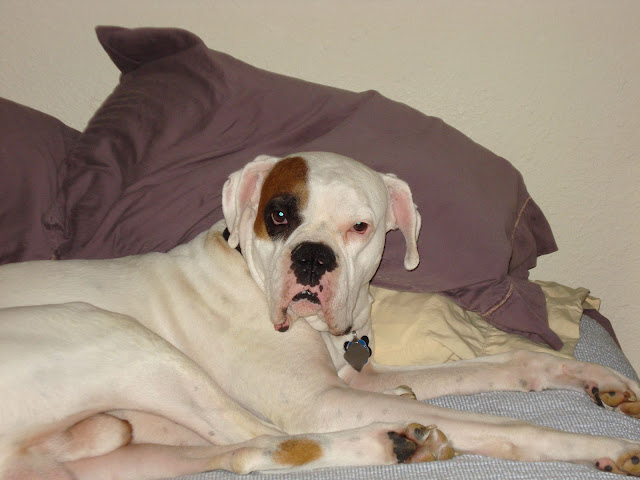 Another of Tysons morning rituals, he will whine and whine until Ive made the bed. He literally wants the bed made so that he can then re-make it just the way he wants it. He's such a turd sometimes. Now that he has all the pillows just the way he likes em, (everything wadded up in a pile) he wants me to go away and leave him alone so he can take a nap.  Nighty nite Tyson.
2 comments:
Labels: China Green Tea

With the unrelenting summer heat beating down, my taste in teas change. Heartier teas like Puerh and most Oolongs are not at the top of my list, they get relegated to the Autumn and Winter months. They are just too heavy, too much for me. I want something clean and refreshing, yet something rich and satisfying at the same time. Ive some China Greens that fit the bill very nicely. Both from Tea Trekker. And both of them superb examples of high quality, handmade greens that are sold at a fair price. Fair market value is my criteria when lurking for new vendors. If I find anything being sold at inflated prices on a vendors site I tend to not buy anything at all from them. Tea Trekker is an online vendor that I,ll return to again and again. Superlatives without the grief of an empty wallet. 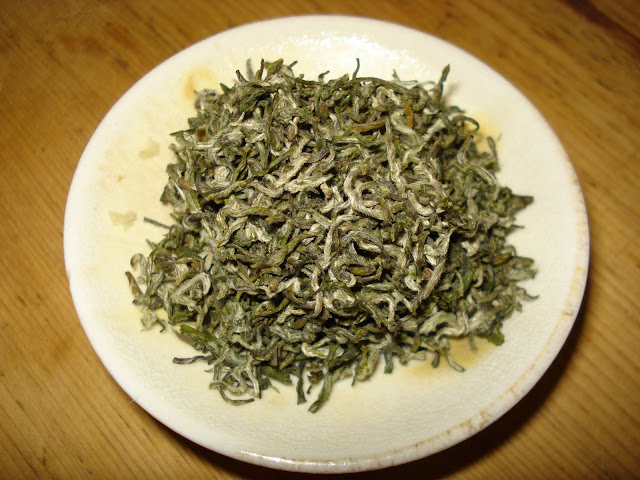 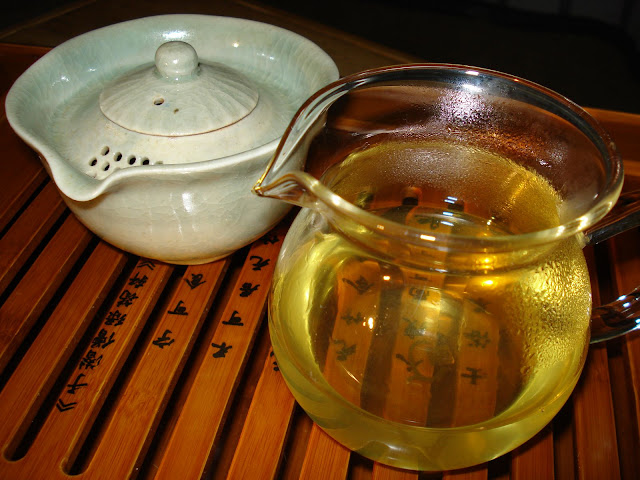 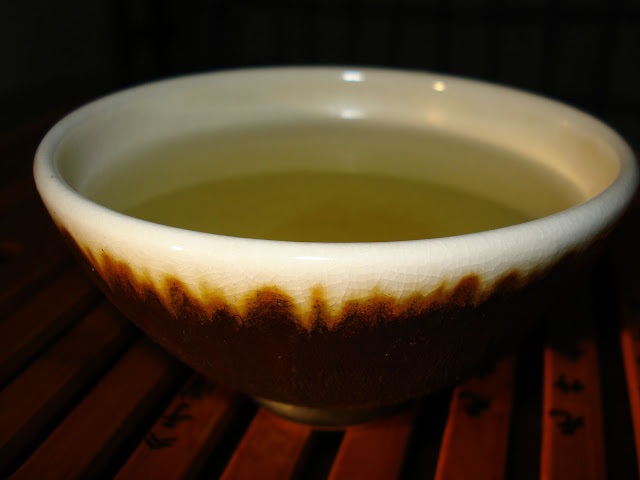 First up is an excellent China green. A 2010 Pre-Qing Ming Gan Lu, or "Sweet Dew" Gan Lu is a tea with a lot of character and a very long history. An early Spring tea that was an Imperial favorite during the Tang Dynasty (960-1279) Grown on Mengding Mountain in the Sichuan Province. Opening the bag fills the room with rich vegetal sweetness. Just the smell of the dry leaf alone makes my mouth water. Comprised primarily of a bud only picking that is covered in silvery, fuzzy down. Soft and velvety to the touch. Vegetal without the raw spinachy tastes of other greens. I love those veggie teas but that veggieness has to be balanced with other flavors and aromas. This tea is buttery smooth with no bitterness or astringency. Even the most negligent of brewers will have no problem with this tea, never becomes bitter when over steeped or when using hotter than necessary water. Durability is good, 2-3 infusions. Brews up a sparkling clean cup of golden, silvery tea. Absolutely delicious. 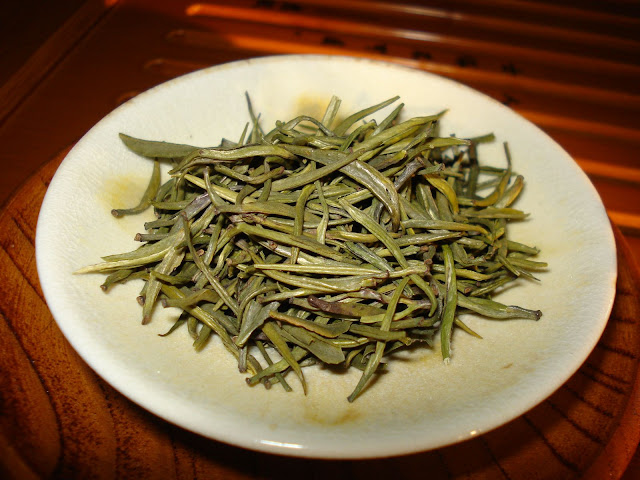 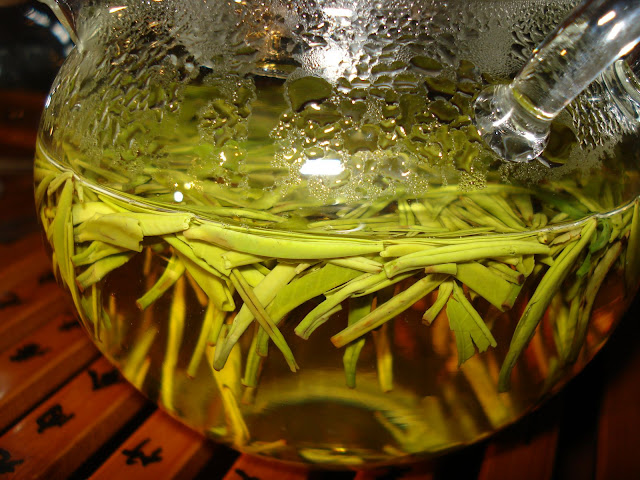 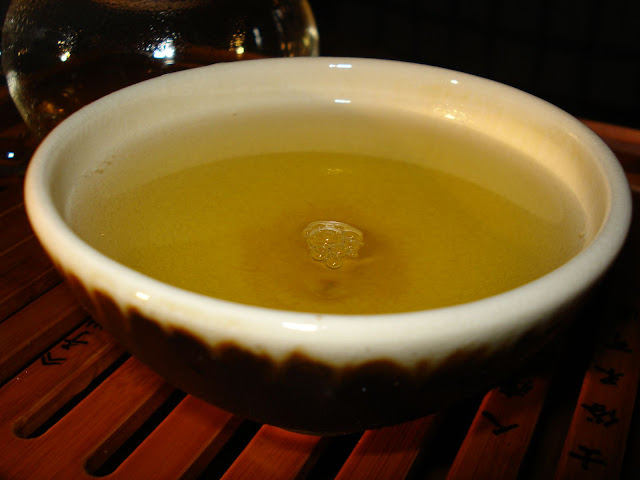 Next up is an equally excellent 2010 Pre-Qing Ming Long Ding from Zhejiang Province. Long Ding is a early season, pan fired tea that's made from a bud only picking standard. This being a "Larks Tongue" style of tea it's best appreciated brewed in a glass pot or cup. The leaves are juicy, plump and intensely green. Long Ding is one of those teas that infuse vertically, the leaves tend to stand on end while brewing. The dry leafs aroma is intensely pungent, reminds me of walking through a pine forest in the Autumn. The teas flavor is slightly vegetal, very crisp with a touch of pine. I suspect that the soil this tea is grown in is very rich in minerals, rocky and flinty soils show up as cleanliness in the cup, at least that's my theory. Delicately sweet and clear as a bell. Very crisp, bright and refreshing, yet at the same time fairly rich. Brewing parameters do need to be adhered to in order to not over steep this tea. It will become bitter if left too long in the pot. What a gorgeous tea! Durability is very good, 3-4 infusions.
Next up, Lu'An Gua Pian and 2010 Pre-Qing Ming Man Tang Xiang.
4 comments:
Labels: China Green Tea 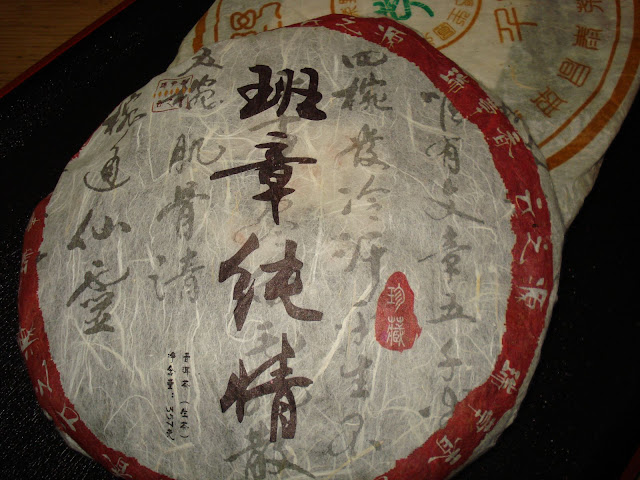 Jeez! Has it been a year since these teas were all the talk? Ummm.......just about! After having a hearty breakfast this morning I was contemplating what tea to wash it all down with and decided to dig into this one, Ban Zhang "Chun Qing" which translates as "Precious Feeling" or something equally silly. I remember loving this tea upon the very first sip, rich beany flavors and aromas sit side by side with nutty notes. Now that the teas had a year to settle in and find it's groove let's see what we have here. This Ban Zhang is one in a series of cakes released by Scott last year. There are also cakes from Yiwu, Bulang, You Le and a Wu Liang mountains in the 2009 line up. 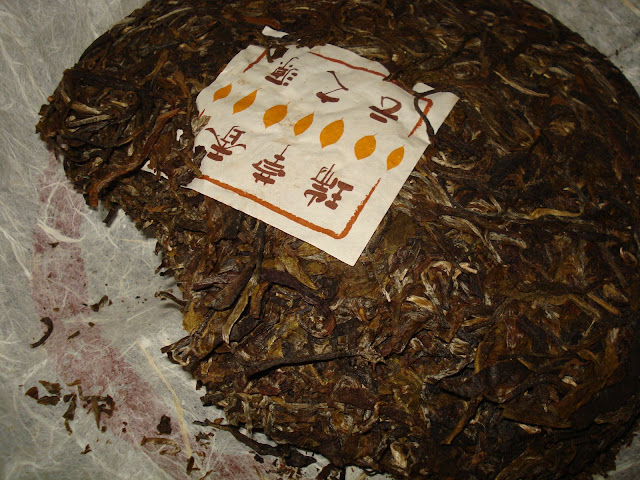 The cakes surface leaf is definitely a shade darker than it was last September. The smell is just a tad woodsier than it once was. The compression has relaxed just a wee bit and it's very easy to separate into a nice pile of unbroken leaf. Keeping the leaves whole makes all the difference in the world, it allows for proper extraction without unnecessary bitterness. Which, speaking of bitterness, I remember when this tea was initially reviewed most people thought this tea lacking in bitterness. Considering that this is a Ban Zhang tea and one of Ban Zhangs traits is that infamous bitterness, a lot of people were left scratching their heads wondering where it was. Well, it's there now. Not obnoxious by any means but there is no denying it now. 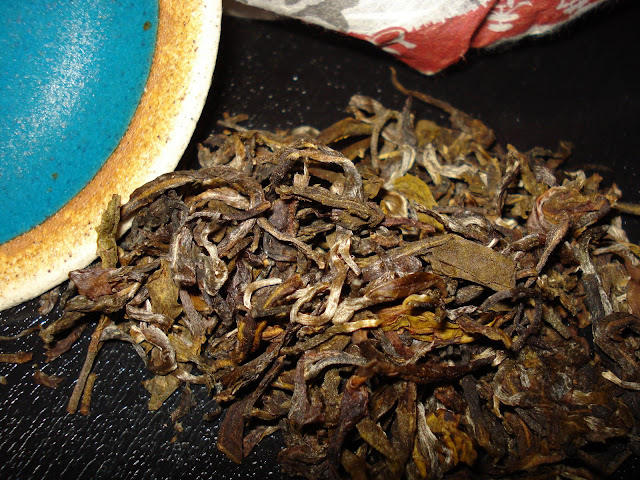 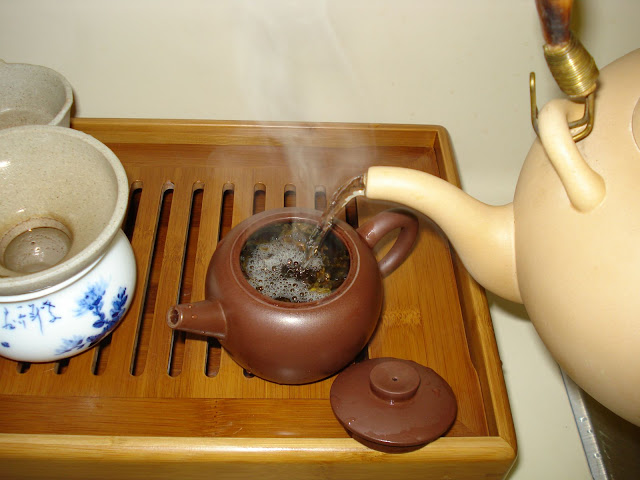 The first Yixing I ever bought. I think Ive had it for about ten years or so. Ten years of sheng poured over the pot has given the pot a beautiful glow. Single hole spout that pours in a good, solid stream with no drips. 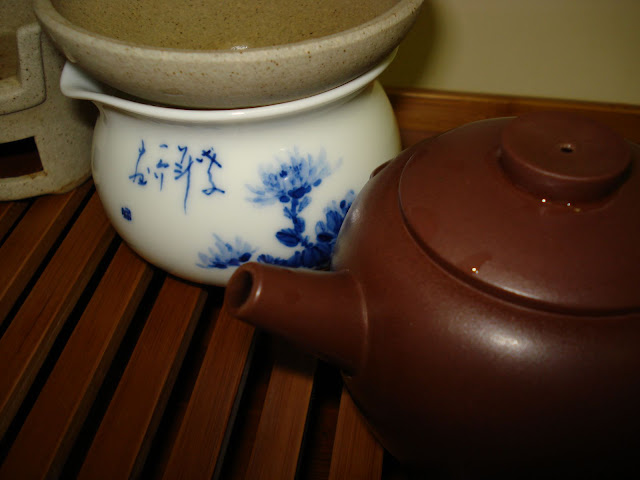 If I were one of those people that names their tea pots I,d name this one Tug Boat. There is something about the pots shape that reminds me of those chubby little boats, small but what a brute. A couple of weeks ago I had added this pot to my garage sale, what was I thinking? I love this little pot, it can brew a pot of sheng like no other I own. It takes years of training to get a pot to sit up straight and behave properly. Nope.......it's not for sale. The teas color has changed as well. Still clear as a bell with a touch of amber starting to show. Just a little more viscosity than when these cakes were straight from the press. I think Austin TX (where I live) has a perfect environment for aging sheng. Average humidity level inside the house is around 55 % with the air conditioner running. The teas flavor has deepened, woodsy and faint tobacco flavors. Long beans and nuts are still there in spades. Very slightly sweet that becomes more dominant in later infusions. Solid but tolerable bitterness. Just a much more solid tea than it was a year ago. But...having said that, I don't see this tea as having the required traits necessary to age well. Now, I could be wrong, it's happened before and I guess theoretically it could happen again. I see this sheng as dropping out for about twenty years or so and then maybe emerging as something tasty. I havn't the time for all that, I,m gonna enjoy it now. Ive come to the conclusion that nothing washes down a hearty breakfast of bacon and eggs, toast and marmalade like young sheng. Aged sheng doesn't do it, youngish, slightly bitter, slightly sweet sheng washes it down the gullet and caps off the meal to perfection. Now it's time to pay the piper and go clean up the mess I made in the kitchen.