Saving the "best" for last and letting Petr's Shiboridashi have the honors we have Dong Cheons Ujeon. Courtesy of Tea Trekker, A big "Thank You" go's to Bob & Mary Lou Heiss for their generosity. Having had both the Jungjak and the Sejak and realizing how different those two teas were I didn't know what to expect from the Ujeon. This Ujeon was made from the second spring pluck (mid April) the Sejak from the third spring pluck, the Jungjak from the fourth. All three teas are made from the exact same semi wild organic tea bush's grown in the Hwagae valley. So..... the waters been boiled, tea tables set,  let the session begin. 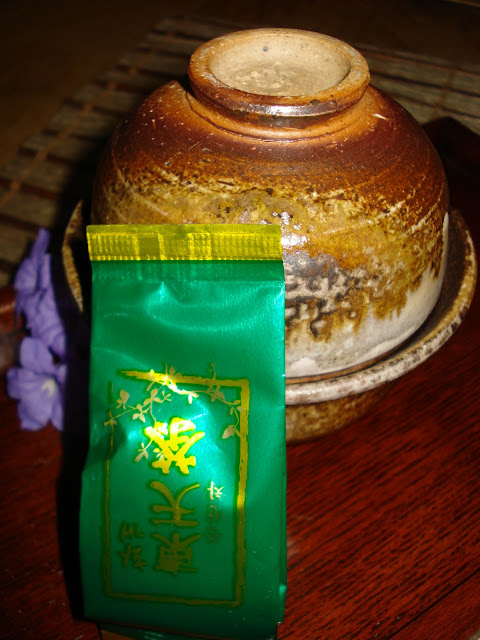 The Ujeon is the most expensive of the three Korean teas currently offered by Tea Trekker. At $60.00 for a canister containing ten 3.3 gm. packets.  It's evidently "worthy" of special packaging. Is this tea worth such a lofty price? In my opinion, it's worth every penny. But having said that, this is a tea I would buy rarely and only for special occasions. Sometimes you've just gotta set limits. 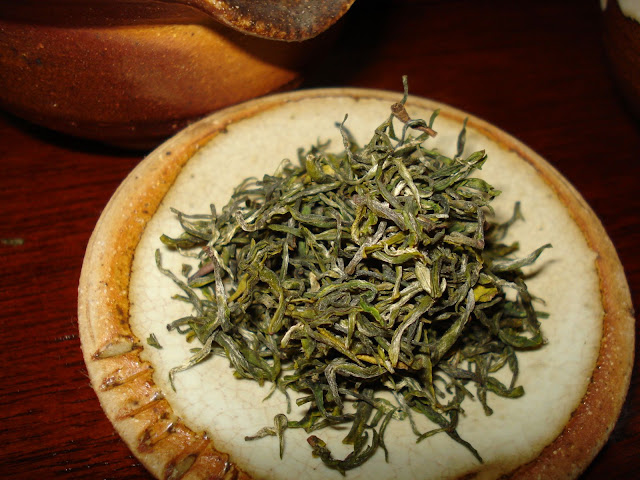 The Ujeon is a much finer, smaller leaf than the Sejak or the Jungjak, which is to be expected. The dry leaf has a rich but delicate silvery, green color. Very fresh, slightly sweet vegetal aroma with traces of cherry blossoms and the tenderest, young, pine. The teas aroma has such depth, clarity and balance. It really does remind me of fresh spring meadows. This tea is special! Lighter and cleaner than the Sejak or Jungjak, almost feminine in it's nature. A little more crisp and savory than the other two teas. In both the Sejak and the Jungjak the cereal or malted grain flavors and aromas are much more prevelant, the Ujeon contains these aspects as well but very subtle. The Ujeons berry flavors are more delicate and understated compared to either the Sejak or the Jungjak. The aftertaste is quite persistent, lasting long after the teas been drunk. 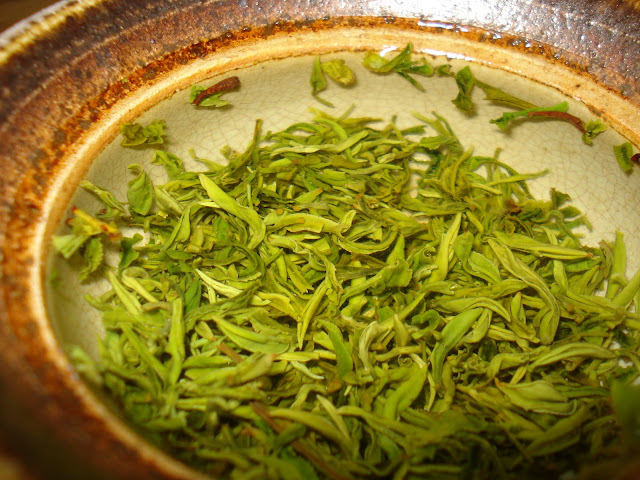 Just look at those leaves! Gorgeous, aren't they? Tender young shoots loaded with juicy spring time goodness. This tea requires water that's a little cooler than would normally be used for green tea, around 160 degrees or so. I noticed in the later infusions that the Ujeon maintained it's aroma through out the session, in fact, even when the session was over the leaves were still quite fragrant. Usually a teas aroma fades more rapidly than this.

Although these teas are pricey  I think it important to fight the impulse to skimp on the quantity of leaf used. Actually, this applies to all teas. You need enough leaf to attain fully saturated flavors and aromas. Don't fork out that much money and then cheat yourself out of tasting the teas potential. 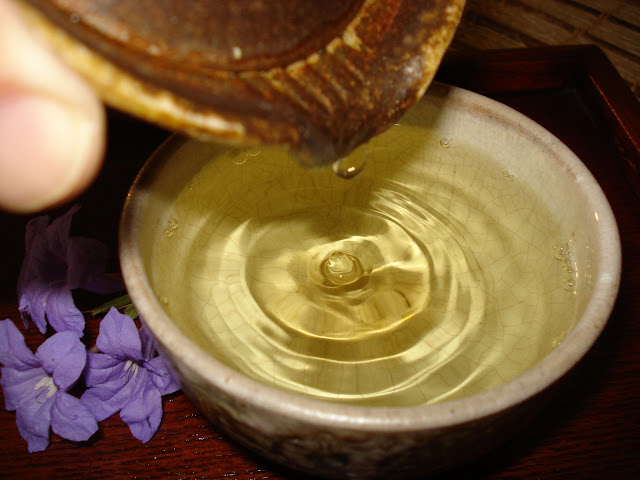 Again, such sparkling, crystaline, clarity. That shimmering, golden, silvery soup speaks volumes about the teas quality. That cup is brimming with some of the juiciest, most delicious tea Ive ever had. It's fascinating to know that all three of Dong Cheons teas are made from the exact same bush's. They are so different from each other yet they also share some aspects in aromas and flavors. I can honestly say that I don't consider the more expensive "best" ones to be better than the lesser expensive. Like three brothers you can see the similarities of all three, but all three have their own identity and character. 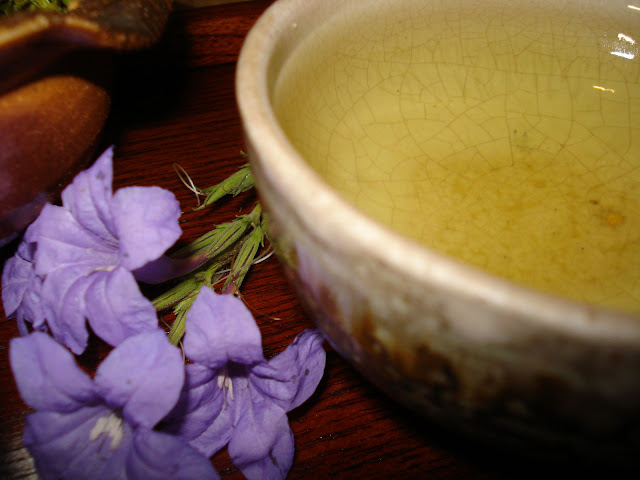 I,m glad I had the opportunity to try these Korean green teas, they are all superb examples of the tea makers art. Also a "Thank You" to Matt for providing us with a wealth of first hand knowledge and much experience with these teas. If this post has tweaked your interest then be sure to visit Matt, Mattchas Blog can keep you busy for hours.
5 comments:
Labels: Korean Tea 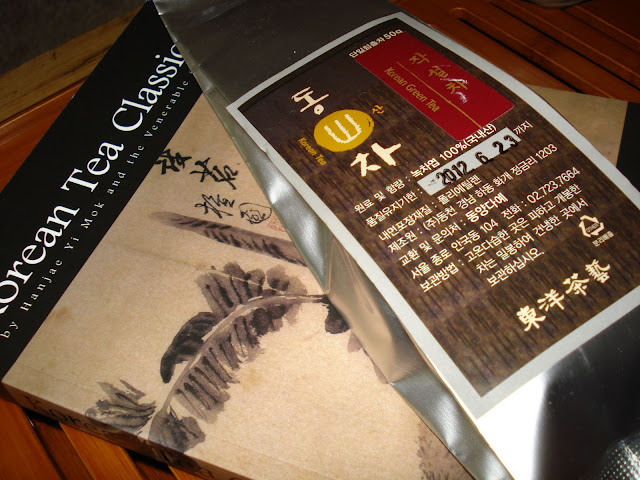 At last! Finally some Korean green teas. As most of you reading this know, Korean teas have been difficult, if not impossible to find here in the U.S.A. But things are changing, there are now a few online sources for these teas, one of them being www.teatrekker.com  which is where these teas came from. I can't recommend Tea Trekker enough, Bob and Mary Lou Heiss know their teas. In all my years of tea drinking I had never had a Korean tea before. Also in all my years of tea drinking I thought I,d had just about every conceivable flavor profile green tea has to offer. Boy was I wrong, these teas are in a class of their own. They deserve more recognition, they are indeed superb. I,m not really going to do an in depth description of these teas flavors and aromas because the ultimate review can be found on Mattchas Blog. If your reading this then chances are good you are already know Matt. So, go give Matt a visit, he can summarize these teas much better than I.

All three teas, Ujeon, Sejak and the Jungjak are made from semi wild, organic tea bushes growing in the Hwagae valley. All three are also made using the Jeong Cha method, which means the kill green stage is accomplished by briefly plunging the leaves into near boiling water, then the shaping and drying is done in one step in a metal cauldron. The more common method of processing tea is to caldlron dry the leaf, out of the cauldron for shaping and resting, then back into the cauldron, back out etc. It requires several times of doing this before the tea is finished. Lastly, all three teas are made from the same semi wild bush's but what makes them so markedly different is the harvest time. In order of harvest is Ujeon, Sejak and Jungjak.


The first one up to bat is the "Sejak" which comes from the third spring pluck. Cutting open the bag unleashes a pungent aroma, very vegetal with some rich fruit aromas in the background, also a slight hint of malted grain buried deep within. Something that reminds me of toasted Nori is also in the dry leafs aroma. O.K. so lets get the kettle on to boil and see what we have here.
Sejak 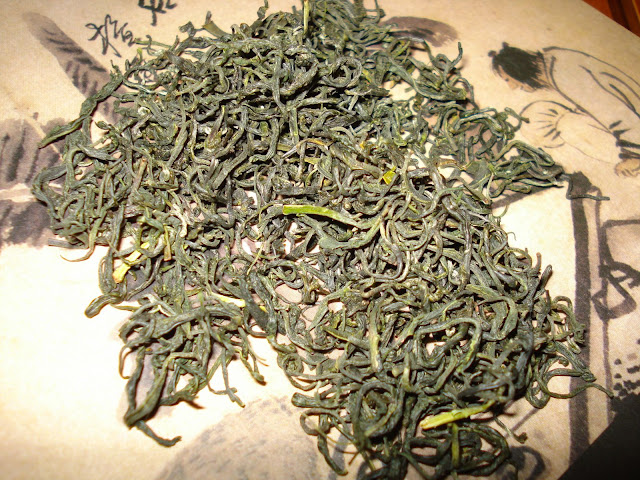 Careful brewing is required here, 170 degree water and attention paid to infusion times and you will be rewarded with a superb cup. Absolutely delicious! I see what Matt meant when he described this tea as being "slippery" reminds me of some kind of tree sap. The flavors permeate into your entire mouth and stays a while, it doesn't just wash over it. The Nori aroma I mentioned earlier shows up in the cup as well. Man.... this stuff is good. The soup has a really nice thickish body.I have found these teas to be much more durable than either Chinese or Japanese green teas. These teas are very complex and additional steepings bring out buried flavors and aromas. It's not one of those teas that just gets weaker and thinner as the sessions continue. I could go on and on trying to tell you what this tea tastes like but like I said.......go see Matt. 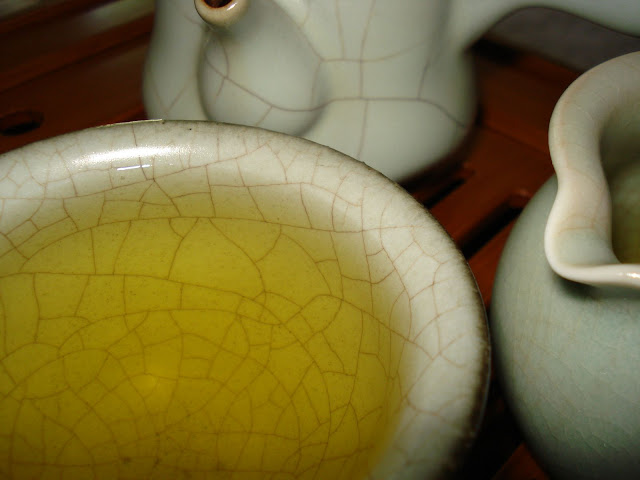 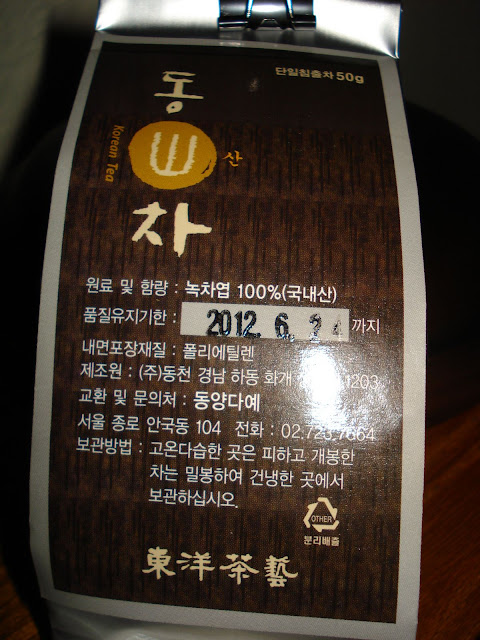 Jungjak is made from the fourth pluck harvest. It's interesting to know that Jungjak is made from the exact same tea bushes as the Sejak.....yet the aromas and flavors are so different. The Jungjak has a deep caramelized toasty malted grain aroma in both the dry and infused leaf. That vegetal, toasted Nori aroma is present in the Jungjak as well but it's way, way back in the background. It smells as though it should taste sweet, but it doesn't. Very rich and mouth watering flavors and aromas of roasted nuts, cocoa, nori and malt. Ive noticed in both the Sejak and the Jungjak the slightest touch of saline in the aftertaste, I wonder if they are feeding these plants sea weed as fertilizer? 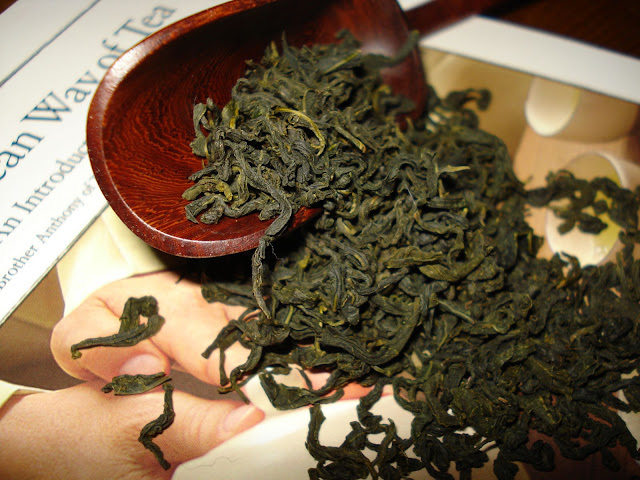 Again, you can tell by the dry leafs appearance that this is a very well made tea, the producers cared about the quality first and foremost. Mind you......this care and attention costs. These teas are quite expensive and I could see myself buying them as an occasional treat but way too costly to drink regularly. Just look at that vibrant green color in the pot. 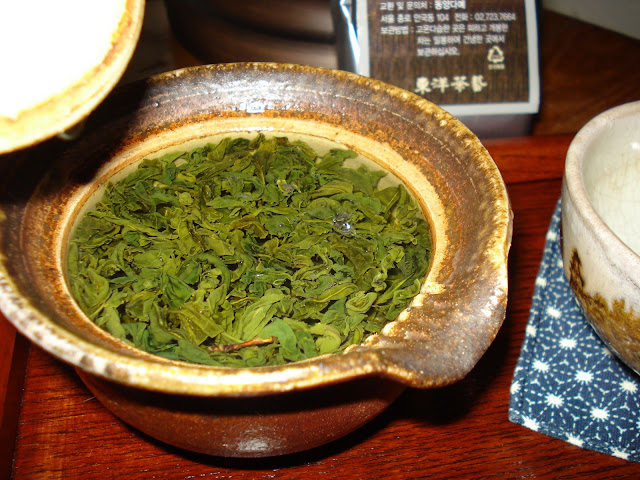 Brews a cup of the most intense yellowy green color. And like the Sejak, the Jungjak has a thickish body. Though the Jungjak is less expensive than the Sejak the price difference doesn't reflect a difference in quality. In my opinion they are equally good, just different styles and flavor profiles. In some ways the Sejak and the Jungjak share some of the same flavors and aromas but it's as if the flavors have been shuffled and the order of dominance has been re-arranged. 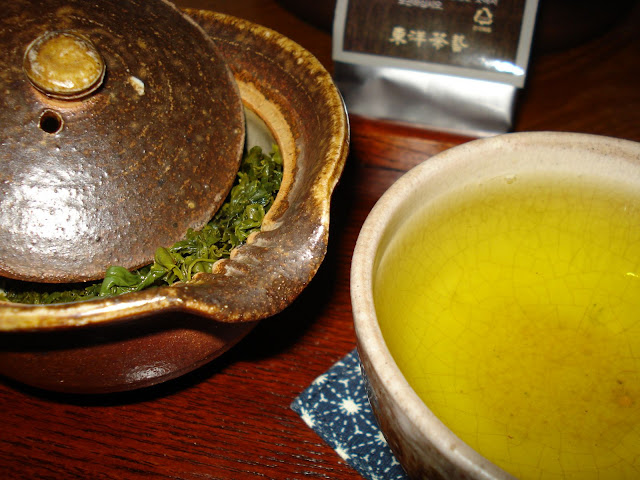