﻿As I have plenty of free time today I thought I,d continue with tasting some of Dao Teas offerings. This tea, like the Balhyocha in the previous post are made by Kim Jong Yeol, a tea master who reportedly quit his corporate job so that he could dedicate his life to the art of making tea. Now that's a man who likes his tea! 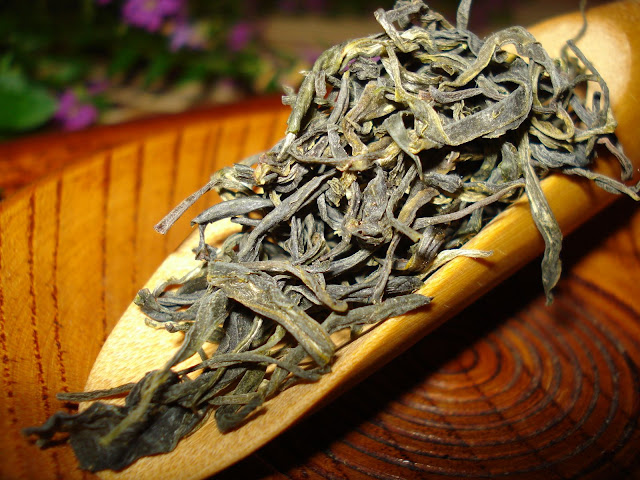 Opening the little foil pack and sniffing, the smell reminds me of sea weed and sencha. A very bright smell as opposed to a tea with a lot of depth. The dusty grey / green of the dry leaf even looks like little strips of kombu.  Some of the leaves are quite thick and chunky, some are more thin and spindly. They all go into the pot along with some 165 degree spring water. An infusion time of a minute and lets see what we have here. Brews a cup of very clear and clean, light yellow soup. In keeping with the dry leafs aroma there is a resemblance to sencha in the cup as well.  Slightly astringent with barely a trace of sweetness. Delicately vegetal with a faint odor of egg white. All of the flavors this tea has to offer are bright, clean and upper palate. 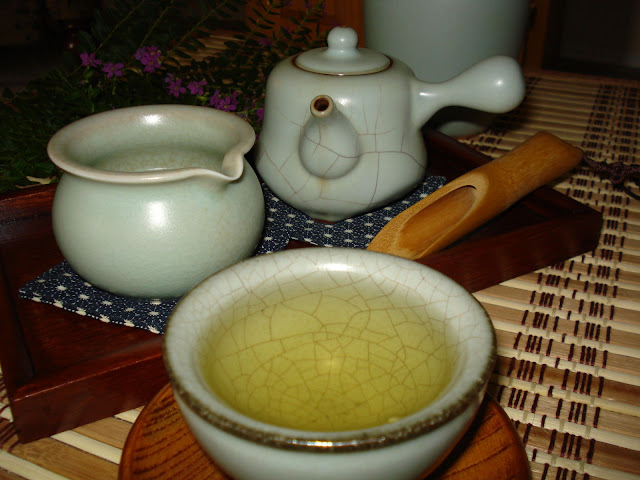 Aesthetically, this celadon tea set made by Xu De Jia  looks more Korean than any other wares I have. The kyusu has developed a small crack on the inside of the pot, sometimes it leaks and sometimes not, this time it didn't. I think it's one of those scenarios where it leaks because I don't use it enough, I don't use it because it leaks. If I were to use it more regularly I,m sure the crack would repair itself. 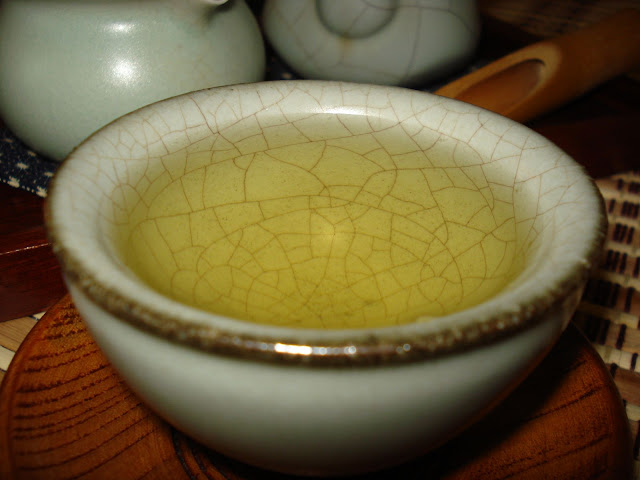 All in all, I,m not a big fan of this tea. It's nice enough but it pales in comparison to the Dong Cheon Korean teas. This tea is just too light, bright and tart for my tastes. The smell of egg white is also a strike against it in my book. I wonder why some teas have that almost sulfuric smell? Ive noticed that same smell in some China Tie Guan Yins before, Yuck! I,ll say this much for it, the durability is pretty good. Even the fourth infusion had some of the same flavors that were found in the first pot. Usually the initial flavors wane quickly and your left with something else. This tea doesn't really evolve or open up into anything other than what it started out with, a light and delicate cup of tea that though it's enjoyable, just isn't to my liking.
Labels: Korean Tea